Social media have done a great deal of good for science. Facebook groups such as IFLScience provide an easily digestible titbit of information on an otherwise mind-numbingly monotonous Facebook feed for over 18,000,000 profiles. YouTube has countless hours of videos dedicated to the advancement of human knowledge while sites like reddit provide people who want a deeper explanation of certain topics a platform to gather that knowledge. However, throughout this piece I will focus on how social media has perhaps shone a not-too-flattering light on science recently.

The most recent newsworthy achievement of the scientific world was Rosetta. Rosetta was launched on 02/03/2004 and travelled 6,400,000,000km through the Solar System, using multiple planets as gravitational assists, before arriving at the comet on 06/08/2014. The path can be viewed on YouTube (goo.gl/Iv8MmL). Not since the days of the moon landing has humanity made such an achievement. Due to the attention of the media the mission was very much public knowledge when the probe successfully landed on the comet on 12/11/2014. One of the scientists who was working on the mission was one Matt Taylor who can be seen here predicting the mission’s success and showing off his commemorative tattoo (goo.gl/gRrxGi). 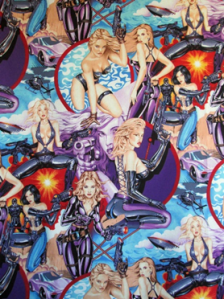 One American Twitter user, @roseveleth, questioned the sexist nature of Taylor’s shirt, writing, “No women are toooootally welcome in our community, just ask the dude in this shirt”. This is a valid, if not presumptive, point because the shirt did raise an eyebrow, with the material depicting women in provocative poses wielding guns. This Tweet was followed by an article from American site ‘The Verge’ titled, “I don’t care if you landed a spacecraft on a comet, your shirt is sexist and ostracizing”. I began reading this satirical article with a grin, after all I thought I had found a site much like ‘The Onion’. I soon realised that this article was not satire and the author was seriously blaming Taylor’s shirt for the lack of women in STEM. Using this one example, this one man and his poor fashion choice as a metaphor for everything that is apparently wrong and sexist about science. The title is almost self-refuting and yet the storm, or should I say witch-hunt, that followed was a prime example of how social media has cast science in a bad light.

The keyboard-feminists, once again, became offended and took it upon themselves to berate Taylor and his shirt. Then the anti-keyboard-feminists came rushing to the defence of Taylor with insults and threats flying all over the place.

I should take this opportunity to clarify the distinction between feminists and keyboard-feminists. The former is a group of which I would include myself believing simply in equality. In the latter, however, are people such as twitter user ‘Feminist Frequency’ with 209,000 followers spewing tweets like, “There’s no such thing as sexism against men. That’s because sexism is prejudice + power. Men are the dominant gender with power in society.” This is why feminism has so many unsavoury connotations attached to it and why people don’t like to associate themselves with such a blind group.

Usually not much would come from the ramblings of these people, the silent majority know that it is pointless to get into online discussions with them. To quote Stephen Fry, “It’s now very common to hear people say, ‘I’m rather offended by that.’ As if that gives them certain rights. It’s actually nothing more… than a whine. ‘I find that offensive.’ It has no meaning; it has no purpose; it has no reason to be respected as a phrase. ‘I am offended by that.’ Well, so f*cking what”.

Much like the vast majority of people, I was willing to ignore all the controversy.It was a day of celebration, a homage to the previous 10 years, a memory not to be sullied by the crab mentality of others. To my dismay, the torrent of abuse and bullying led Taylor to apologise to the world while choking back tears. The man who was previously on top of the world, now cowering in front of the TV cameras, like a puppy who’s peed on the rug. I was, ironically, offended that Taylor apologised.

The Verge only had one problem with the shirt, it was sexist. The shirt was hand-made by close friend Elly Prizeman (a tattoo artist and alternative model who arguably pushes the social boundaries of normality and challenges stereotypes on a daily basis) for Taylor’s birthday. I would argue that the fact that she spent 6 hours making the shirt means that it is a piece of art. Furthermore, because it is a piece of art I am not willing to accept a journalist’s opinion on whether it is sexist or not, especially when I have the meaning from the artist, “Nothing sinister at all was meant behind it at any point. It was just a bold and individual fashion item.” Prizeman, a woman who does more for feminism every day than any of these journalists and Twitter users will do in their life, makes a shirt that she doesn’t see as sexist, therefore it is not sexist. 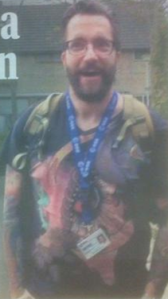 Not surprisingly the goalposts were then moved, with many people backpedalling to say that the offence wasn’t about the sexism of the shirt, it was about the unprofessional appearance and distracting nature of the shirt. In response; professionalism is subjective. The only entity that can deem Taylor as unpresentable is the ESA or the people who run HR. If we are willing to accept that the shirt is not sexist then it is the vibrant colours which are proposed to be unprofessional, however, pictured is how Taylor usually dresses for work. The shirt in the picture is not, aesthetically, that different to the one which caused all the controversy. On top of this, Taylor has been pictured wearing a ‘Cannibal Corpse’ band shirt at work, both of these shirts have gone unmentioned throughout this ordeal and that is because the controversy was not really about his professionalism. As a side note, it is more than acceptable in Hawaii to wear Hawaiian shirts to weddings and other formal events, appropriate attire is entirely subjective and relative to your environment and previous experiences. Taylor’s bosses and colleagues had no issue with this shirt or the many different ‘unprofessional’ shirts he has worn in the past.

Using a similar argument, how can the shirt be distracting when every part of Taylor’s appearance was distracting? Journalists jumped at the opportunity to say that the shirt detracted from the science and that he deserved the abuse because he chose to wear it (let’s ignore the ‘deserved it because of what he was wearing’ argument.) If this was really about the distraction from the science why did nobody mention his trainers, shorts, displayed tattoos, metaphor of Rosetta, unshaven face and general lack of scientific look that he has?

The articles writing about the shirt kept referring to the ‘women in science’ who were offended by the shirt while the only people who seemed to get offended were the vocal minority who feel the need to spread social equality and justice where it already exists. To be fair most of the other social media platforms had a more level-headed view of the whole matter, and so not all hope is lost for science’s relationship with social media, after all Twitter will be dead in the not so distant future with its restrictive, poorly designed interface and easy to spam format.

To get a sense of the real views of women in science I turn to Christina Sommers, a feminist academic at the AEI, “What nonsense. No woman with a serious interest in astronomy would be deterred because she saw a tattooed guy in a risqué shirt…Women are welcome in STEM, but I doubt that most scientists welcome the arrival of these chronically-offended, humourless gender warriors”

What do you think deters women from science more, a shirt depicting some empowered women or keyboard-feminists telling girls that science is misogynistic and don’t dare think of going down that road for a career/degree?

The idea that women are being kept out of science is nonsense. The amount of money and time being invested into bringing women into research is at a historical high. The gender divide in the last five years is now almost equal. Compare that to 10 years ago when science was male dominated and one can see the huge success. These people have absolutely no idea of the current state of the scientific community, they’re just going off their perceptions as an outsider. This is the problem with social media like Twitter, people will perceive science as being sexist simply because of the controversy it hosted. If only Twitter was self-moderating like Reddit, then the vocal minority would have a much quieter voice. At least I can take solace in the fact that much of the controversy was sourced in America, where political correctness is a much bigger threat than here in the UK.

Have social media improved the perception of science?