The thought of an invisible hand aiding students during an exam is sure to fill the sternest of invigilators with terror. Yet with the exam boards across the UK being governed largely by free market economics, it is something that has been occurring and distorting the UK’s education system for over the last decade. Further, there is a clear chasm between the content of current science GCEs and those taken by the current generation, particularly in the case of A-level Physics, whereby the very language physics is expressed in, calculus, is missing. This lack of integrity in current GCEs has led to a plethora of questions; for example, how can top universities determine the calibre of students when one in four attain A*-A grades? and how can undergraduate ‘physics students’ be prepared to delve into the realms of physics without ever being previously exposed to its true language and context? The antinomy of a system consistently awarding higher grades to students, to the detriment of a meritocracy and their ability; is, I am sure, not lost on many. Perhaps the rhetoric of Education, Education, Education, has not given people a hand up, but instead pulled the bar down?

In fairness, to identify the inflation of grades as a political by-product of here today, gone tomorrow politics is, at best, flippant. Instead it is caused by a much more intrinsic problem which stems from the way qualifications are administered within the UK. The way GCEs are awarded within the UK differs widely from other countries throughout the world, in that it does not have a single unified body that awards GCEs. Instead it allows private companies to design and create courses based on a government stipulated curriculum. Subsequently, these companies are allowed to compete with one another in order to solicit contracts with schools and colleges across the UK – an industry estimated to be worth £300 million. Naturally, being private profit-driven businesses competing for a market share, market forces begin to operate. The forces operating and the mechanism through which grade inflation has occurred are relatively simple to understand. For example, if a product is intrinsically better (i.e. an awarding body statistically gives higher grades) then the demand for that product increases. Factoring in the desperation of schools trying to climb the league tables, it is no surprise that exam bodies have continually (until recently) been awarding higher grades. Moreover, there have been several public spats between awarding bodies that have accused one another of having exams that are too easy, exemplifying that the issue exists, and how free market economics is still influencing the education system. 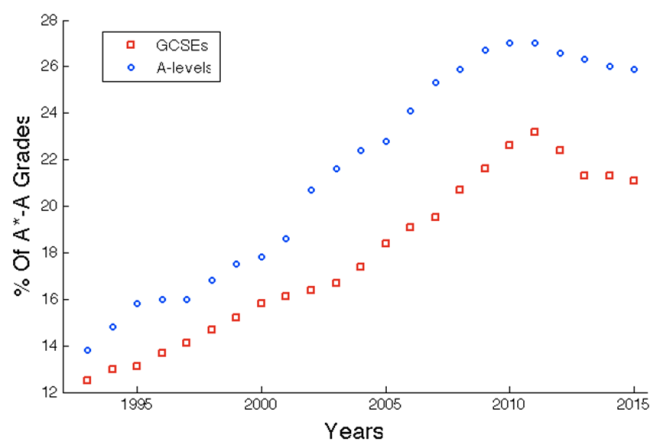 This acknowledgment of an increase in higher grades being awarded is not new and has consistently been brought up year upon year when the new set of GCE results come in. However in 2012, and for the first time ever, Ofqual admitted that there was a systematic and continued inflation in grades throughout GCEs in England. One of the solutions mooted during the circus of events surrounding Michael Gove’s tumultuous reign as minister for education, was to create a single nationalized exam board. This would supposedly stem the ‘race to the bottom’ by removing the competition between different awarding bodies. A Tory minister advocating for the dissolution of a free-market industry, abolition of competition and a new nationalised body?

It is no wonder that, like many of Gove’s policies that were either swiftly implemented or quickly forgotten, this notion was swept, yet again, under the rug. Instead, Gove – who was once called a ‘demented Dalek’ in response to his suggested policy of punishing pupils with ‘community service’ (incidentally now the minster for justice), instructed Ofqal to make GCEs harder. In fairness to his directives, this is exactly what has happened. The initial set of GCEs released under Gove in 2012 showed for the first time ever a reduction in the amount of A*- A grades being awarded. Further, since 2012 there has been a consistent trend of deflation in higher grades being awarded. If this trend should continue, or at least come to some sort of respectable equilibrium whereby there is sufficient distinction between the calibre of students, then would it be fair to accept the current system as adequate?

Unfortunately it isn’t so simple. Even if the variation of grades awarded are ‘correct’, the issue of having several awarding bodies still remains when it comes to upholding a meritocracy. As, even if grade deflation has occurred, it is still possible for awarding bodies to be divergent in respect to the spectrum of grades they award. For example, in 2015 the difference between the amount of grades awarded A*- A for AQA and Edexcel in Physics A-level was 1%. Hence, a student would not be disadvantaged in regards to the exam he sat. However, compare this to A-level mathematics whereby 4% more people attained A*- A grades at Edexcel than AQA. On the surface 4% doesn’t seem substantially high, but when considering the bell curve nature of mark distributions and the amount of students who potentially missed out on their offer – which they may have met if they sat an exam from a different board — is surely unjust.

I understand to some reading this that I may sound bitter, that I may have missed a university offer by the slimmest of margins, which I would have received had my school have opted for a different awarding body. In actuality, my A-levels of Economics, Politics, History and Psychology have had next to nothing to do with my University course. Instead I opted for a foundation year at the University of Nottingham, where the course itself was essentially tailored to the corresponding undergraduate physics degree. The relevance of this is important, because during first year I found myself substantially more prepared to tackle the course than my peers – the vast majority of which had come straight from A-levels. We had been, albeit minimally, exposed to the use of calculus in physics and understood the context that physics had to be approached in – mathematically. This was in stark contrast to some peers, who became wide eyed at the realization that a degree in physics was not as wondrous and mesmerizingly philosophical as Brian Cox would have us believe. Therein lies yet another way the education system has failed some students, as the very course itself, in the most innate way possible, has failed to prepare students for their future endeavors, which is surely the most intrinsic point of education?

Regardless, it seems incredibly unlikely that both calculus will be re-incorporated into A-level physics and that the government would consider a single exam board, despite Nick Gibb recently saying this in August. Further, I’m sure the Old Etonian lobbyists working at the behest of the awarding bodies would prove to be incredibly influential with old boys Dave and George. Thankfully, grade inflation has started to reverse and the regulation introduced has begun to curtail the free market behavior of awarding bodies. Yet, looking at the graph of grade inflation one cannot help but think about how the supposed invisible hand theorized by Adam Smith has developed a very physical touch.

Exams, Students, and The Invisible Hand